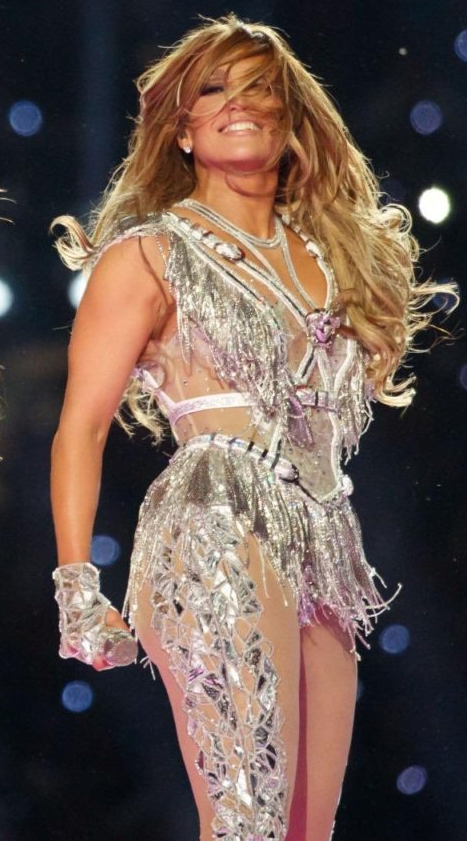 The Superbowl, and it’s accompanying rituals, namely the halftime show, has become a consistent and unwavering part of American culture. With more than 140 million viewers1 for super bowl 54 (LIV – 45 reversed) last February (02/02/2020 – a palindrome mind you) it is one of the most opportune times to tune people’s subconscious via TV “programming” and communicate various large goals.

A warning, this post is going to be long as even though the show is fairly short in terms of entertainment length, it’s so packed with meaning and symbolism.

Start By Watching the Show

Phew… that was a lot. A non-stop, action-packed 14+ minutes of booty worshiping and “latin-flavor.” I don’t mind looking at Lopez or Shakira, but for my money, Katy Perry did a much better job last year. On to the details:

A Breakdown of Events – Shakira

A breakdown of each of the elements I noticed while watching and re-watching. This is pretty exhaustive, and includes slight commentary and analysis when appropriate:

Keep in mind the following definition – ly·can·thro·py – the supernatural transformation of a person into a wolf, as recounted in folk tales – as you read these lyrics.

SOS, she’s in disguise
A Domesticated Girl, That’s all you ask of me
Darling it is no joke, this is lycanthropy
The moon’s awake now, with eyes wide open
my body’s craving so feed the hungry

While this song is playing the women stalk around the stage angrily with the choreography designed to make them look like hungry wolves.

Like the empires of the world unite
We are alive

As she plays guitar, she’s flanked by one black man, one white (duality symbolism) who are also playing guitar.

At this point they start playing Led Zeppelin’s Kashmir (Jimmy Page was a devotee of Crowley, even buying his home).

Fourth song: I don’t know what it is – Shakira is speaking Spanish, playing with a rope (at first making it look like it’s binding her, then playing with it as a dancing tool).

Fifth Song: Whenever, wherever – Video – the lyrics are interesting, but more on that later.

By this point I’ve noticed there were virtually no white people – most of the backup dancers were black with about 1/3 being lighter skinned Latins. Maybe one white girl.

Miami is kind of special in that way though. I used to spend a lot of time in Hialeah for example, and it’s weird for people in many places around there and Miami to speak English. I digress..

A Breakdown of Events: Jennifer Lopez

JLow comes in at precisely 6:16 – perhaps a nod to Revelation. This also ties us back to the multiple Crowley references to far (Kashmir, & Shakira and her harem being “Scarlet Women”)

And one more quote, tying Crowley to the number:

θηρίον (Therion) appears in the New Testament, means “wild animal” or simply “beast”. Crowley as a rambunctious rascal was called “the beast” in childhood from his mother (who he didn’t quite respect), so he didn’t find this offensive and even reveled in the title, as children are wont to rebel and as his father was a preacher the bible was an important book in the household. As an adult, he called himself To Mega Therion, the Great Beast and took up the number 666. This meaning changed from identifying in a rascal, to identifying in the fire-spirit, the guiding light, the divinity of the solar god.

The song pops in with the line “It must be the ass…” with Jlo circling her big butt with glittery diaper looking thing.

An interesting last song considering the cultural debate over migrants – the whole theme was Latin America, with most of the stage performances by Latins (and many Spanish songs)… in the USA!

What jumps out to me immediately is that an analysis is easily divided by the two separate performances from Shakira and Jennifer Lopez. Their acts, movements, symbols, colors, and choreographed spectacle comes together to continue the charge of globo-homo-ism continuing the incantations of many other performers and writers across all of entertainment.

Short summary – your body has urges that need to be fed (no mastery of your feelings/body), instead indulge it.

Shakira – whenever wherever https://www.youtube.com/watch?v=wZOqrx0ETGk – I’ve heard this song 1000 times, never paid attention to the lyrics, she’s venerating a spirit of some kind, very interesting.

Upon re-reviewing everything, including the performance, and reflecting upon the last year+…

I do believe this was a symbol to start revelation (it is my opinion we are currently in revelation – although not really, like yea – OK guys we get, we know you want us to think we are…)

Lopez’ daughter in her cage was a symbol for COVID’s 6-foot rules. Matches too closely. Obviously only meaningful to the unwashed in hindsight.

“The empires of the world unite…” – interesting that less than a month later, they would move in virtual lockstep with their COVID response (with any dissenting world leaders being openly murdered).

The easy to spot further destruction of the female, replaced by the masculine, and the inversion of the sexes.

Blatant race connotations. Whites should be minimized or demoralized. – Since this has happened both the FBI and DHS have come out stating that whites represent the larger terrorist threat within the United States (the EU is saying the same thing).